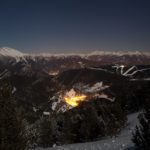 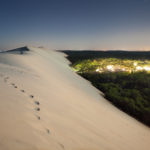 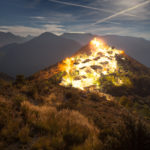 Through a committed and citizen approach, Xavier Dumoulin seeks to make us aware of the damage of an excessive development in front of a nature, which regresses each day a little more. The civilization spreads like a lava flow in the wilderness, which he illustrates in the series « Incandescences ».

Xavier Dumoulin brings us to the natural landscapes that we have always seen, which seem to be immutable. When we look at it, these fragments of space are only one part of a great All in which each element influences on the others, an immense mechanism in which each cog has its precise place. Like a thread drawn, between preservation and change, the natural limits move by the warming of the climate. This will not be without consequences for ecosystems, biodiversity and natural disasters. However, our planet has undergone other upheavals and the one that is looming will certainly not affect it. We have a substantial place in these balances as a gear but also and above all as a clockmaker. Tight fools, we walk on this fragile thread without noticing it seemingly, blinded by the whole money and the quest of the ever more in an atavistic frustration.